Home Politics Exclusive: 10 FACTS on the Dozens of Federal Operatives Who Infiltrated the Trump Crowds on January 6th
Politics

Exclusive: 10 FACTS on the Dozens of Federal Operatives Who Infiltrated the Trump Crowds on January 6th

In July TGP contributor Cara Castronuova released whistleblower documents, text messages, and audio transcripts of FBI informant James Knowles’s communications with his FBI handlers on January 6. The evidence exonerates Trump supporters and the Proud Boys of any conspiracy or planning to storm the US Capitol, to enter the US Capitol, or to overthrow official proceedings.

The evidence reported by Cara at The Gateway Pundit was explosive.

IT DID NOT HAPPEN as we all know.
Now we have the proof!

THEY ALL LIED AND WE HAVE PROOF! Highly Sensitive DOJ Jan 6. Documents Leaked to The Gateway Pundit – FBI Confidential Human Source INFILTRATED Proud Boys, Ran FBI Operation on J-6, Reported They Were INNOCENT! — See Texts and Documents IN FULL!!

The FBI had the evidence that there was “no conspiracy” or plans made by the Proud Boys and others to invade and take control of the US Capitol.  The FBI ignored this information from their own operative.  They ran with lies about an insurrection instead.

FACT 2: The FBI was recruiting men and women to infiltrate the crowds and work as operatives prior to January 6 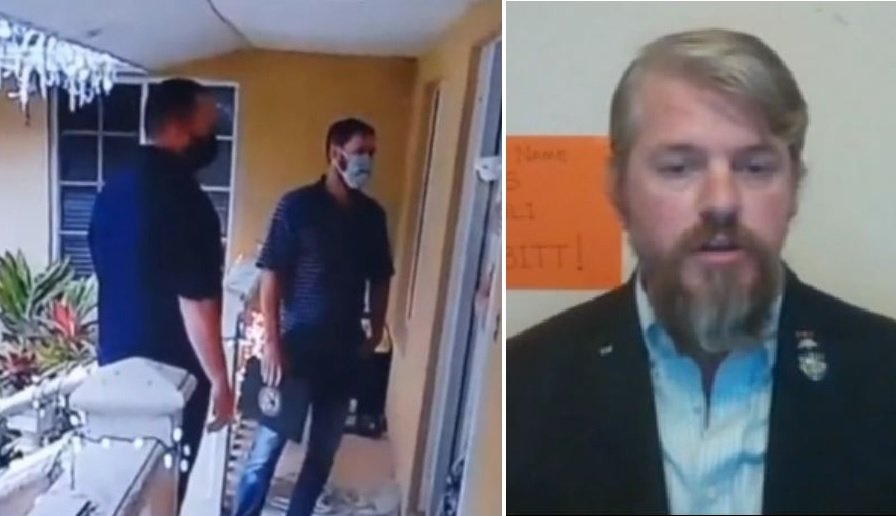 Veteran and former Green Beret Jeremy Brown (on right) and the FBI agents who came to his home to recruit him as an operative on January 6. (left)

On Thursday afternoon, September 30th, at 3:45 PM Eastern the FBI raided Jeremy Brown’s home and arrested Jeremy. The charge is trespassing. The FBI sent 20 vehicles for his arrest. DHS and Pinellas County law enforcement were also present. The FBI was in Jeremy’s home for 5-and-a-half hours looking for evidence.

The FBI searched his house, RV, and trailer. Then they arrested Jeremy and took him away.

Jeremy’s family contacted The Gateway Pundit the next morning.

Jeremy Brown is a Green Beret and former Republican candidate for Congress in Florida’s 14th Congressional District. Brown served in the United States Army from 1992 to 2012 and reached the rank of Special Forces Master Sergeant.

Jeremy Brown NEVER entered the US Capitol on January 6. His actual crime was refusing to be an FBI informant as we describe below.

Not only did Jeremy refuse to work as an FBI informant on January 6th, he went public with photos and audio of the conversations he had with

As we reported months ago, Jeremy Brown refused to be an informant for the dirty FBI — They wanted him to be one of their operatives at the Jan. 6 Trump rallies.

According to an earlier TGP report:

The FBI called Jeremy’s cellphone and asked for a meeting after trying to contact him at his house. Jeremy then met with the FBI agents at a restaurant in Ybor City in December. He told Brandon Gray that 38 seconds into the interview the FBI attempted to recruit him to spy on the Oath Keepers.

Jeremy refused to be an FBI informant so they stormed his home and arrested him on bogus misdemeanor charges months after the Jan. 6 protests.

“I Forgive My Son for Working with the FBI to Convict Me” – Exclusive Interview with Convicted January 6th Political Prisoner Guy Reffitt from DC Gitmo! – MUST LISTEN HEARTBREAKING AUDIO!

Developing: Luke Robinson, AKA #GingerGun, Was Only Protester Filmed with a Gun on Jan. 6, The FBI Later Removed Him from their Most Wanted List — Was Also Accused of Wearing an Earpiece

FACT 5: AT LEAST 20 undercover FBI and ATF operatives were running operations in the crowd on January 6

The FBI finally admitted last September to The New York Times that they were running informants and operatives inside groups attending the January 6 rallies in Washington DC.

In fact, one of the first “protesters” inside the US Capitol was an FBI informant.

There is also evidence that the US Capitol Police were also running informants and operatives inside the Trump crowd including members who entered the US Capitol with the protesters.

Now we learn that at least 20 assets from the FBI and Bureau of Alcohol, Tobacco, Firearms, and Explosives were embedded in the crowds at the US Capitol on January 6, 2021.

“Was Ray Epps A Fed?” – ‘I Can’t Answer That’: FBI Asst. Director Refuses To Answer Any of Ted Cruz’s Questions About Jan 6 in Fiery Exchange on Capitol Hill – (Video)

ANOTHER J-6 INFILTRATOR? Megan Paradise, the Ray Epps Female Clone, Caught on Megaphone Directing Trump Supporters to US Capitol, Broke into Lawmaker’s Office, Filmed the Room, Has Not Been Arrested

Why has the FBI not followed up on several violent protesters who were caught on video?

Video Reporter Bobby Powell on Violent Jan. 6 Protester: “This Guy is a Federal Agent – I Have Heard Nothing But Crickets from the FBI On This Guy” (VIDEO)

We discovered this less than a week before their sham trials in Washington DC where they are already determined to be guilty as charged.

EXCLUSIVE: DOJ DROPS A BOMB! Admits Federal Government Ran Informants Inside the Oath Keepers on Jan. 6 – Spring This On J6 Attorneys Less than One Week Before Trials

FACT 9: Former DEA Agent was PRESSURED to go inside US Capitol on January 6th by Informant “friend” he was with.

We may never know how many confidential human sources the government was running in the massive crowd on January 6th.

We know there were dozens of operatives in the crowd.

FACT 10: January 6th was an intelligence operation run by the US government against the people of the United States.

The post Exclusive: 10 FACTS on the Dozens of Federal Operatives Who Infiltrated the Trump Crowds on January 6th appeared first on The Gateway Pundit.

“Tehran’s Streets in the Hands of the People” – Crickets from Jihad Squad!