Home Politics Schizophrenic Homeless Drug Dealers Are On A RAMPAGE Taking Over The Streets Of San Francisco — This Is What Democrat-Run Cities Look Like Across The U.S.
Politics

Schizophrenic Homeless Drug Dealers Are On A RAMPAGE Taking Over The Streets Of San Francisco — This Is What Democrat-Run Cities Look Like Across The U.S. 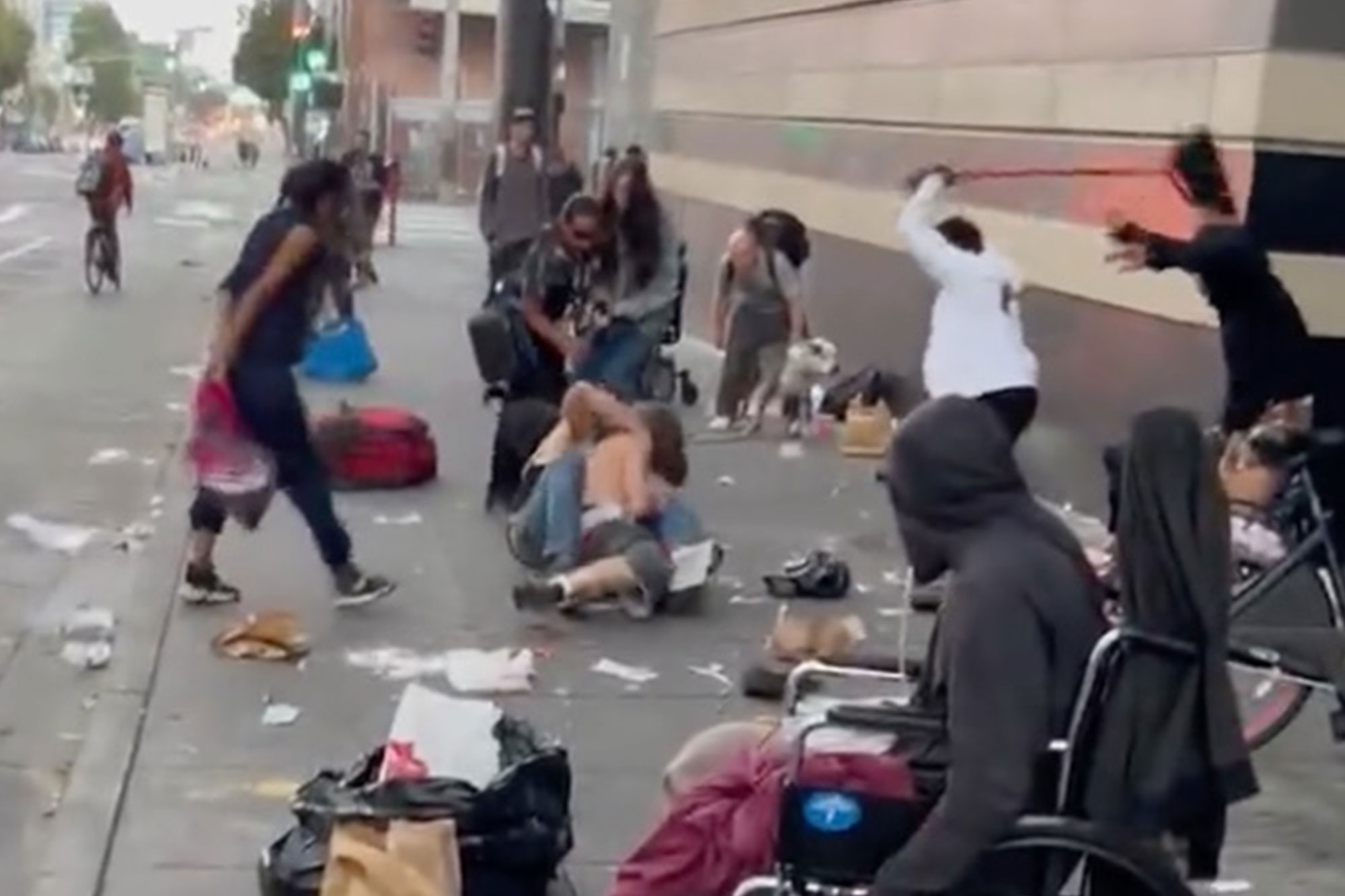 Mentally ill criminals are wreaking havoc across the streets of progressive cities as policies instituted by Democrat lawmakers, designed to end the rule of law, take effect.

The majority of homeless drug dealers and drug addicts are moving to the Democrat-run city to receive welfare, sell drugs, and get away with violent crimes while surrounded by police. Defund the police measures and bail reform have crippled law enforcement officials’ ability to fight crime while policies enacted during the covid pandemic allow criminals a get-out-of-jail pass.

Ultra-liberal San Francisco has become the capital of crime wave hysteria as policies passed to defund the police, which bar cops from arresting or jailing violent criminals, take effect.

In July, San Francisco implemented a $3 million program to deploy community workers instead of police to respond to “low-level” emergency complaints about the homeless.

A viral video showcases the effectiveness of the “crime-fighting community workers” amid the dire homelessness crisis in the city.

Two men, one of whom is shirtless, are seen brawling in squalor on the trash-littered city sidewalk, in footage recorded by J. Terrell Allen while walking around his neighborhood.

As the two men wrestle to the debris-ridden ground, another man gangs up on the shirtless man, beating him to the ground down with a broomstick.

The crowd of apparently homeless people appears unfazed by the chaos as another man tosses a pair of shoes in a plastic garbage bag and walks off., according to the video has garnered 5.4 million views.

On my evening walk. SOMA isn’t safe. Just happened. This is disgusting @MattHaneySF. I’ve written to your office and you and failed to take action. Why??? Is it worth your time? pic.twitter.com/cLwAtb4ZGU

“I love going for long walks and passing by this every single day in my hood,” Allen added in a separate tweet. “Love the smell of crack and poop. Beautiful San Francisco.”

This is exactly what politicians like @SenBlumenthal @ChrisMurphyCT @SpeakerPelosi @tedlieu @RepSwalwell want. A broke country while they get to become filthy rich. They send billions of dollars to foreign countries so they can get kick backs while our country rots

“If we’re being honest, they pay you to be homeless here,” notes Shellenberger, who conducted interviews with dozens of homeless drug dealers and addicts. “They also let you sell fentanyl to children.”

People say lack of housing forces local residents into the streets, but James says he came from Texas to San Francisco for the drugs, the non-enforcement of anti-camping laws, and the $820/month in welfare & food stamps. James says he sold fentanyl, 2 weeks ago, to a 15-year-old. pic.twitter.com/5qMr6tmlWs

“I get $620 bucks a month”  from “a f*cking phone call,” he said.  “Two hundred food stamps and $620 bucks a month, forget about it. Why wouldn’t I do it. It’s fucking free money. This right now is literally by choice. Why would I want to pay rent. I got a fucking cell phone that I’ve got Amazon Prime and Netflix on.”

Like James, the majority of the homeless people occupying the streets of San Francisco relocated to the city with lax laws from other states.

A drug addict named Ben who moved to San Francisco from Alabama described watching “a man get shot in the head right” by  “another homeless guy. ”

People say high rent causes homelessness but Ben, who has been homeless in San Francisco for 7 years, says the “vast majority” are homeless due to addiction. Just 6-7% are from SF. Ben says he “boosts” (shoplifts) and breaks into cars to pay for his $60/day heroin habit. pic.twitter.com/uewKTtBuOS

“Listen to the homeless,” Shellenberger captioned a thread featuring videos of interviews with homeless drug dealers who warn people are getting “raped” and people getting “hit in the head with crowbars and bats” on a regular basis in broad daylight in the blue city.

Similar destitute conditions are found across the nation in Democrat-run cities as the cries to defund the police take effect.

NEW VIDEO: The 3200 block of Shelbourne St in Kensington is CRAZY.

Dealers/lookouts on both ends of the block. You can hear the lookout shout to announce our presence. pic.twitter.com/4NUMCwAuEw 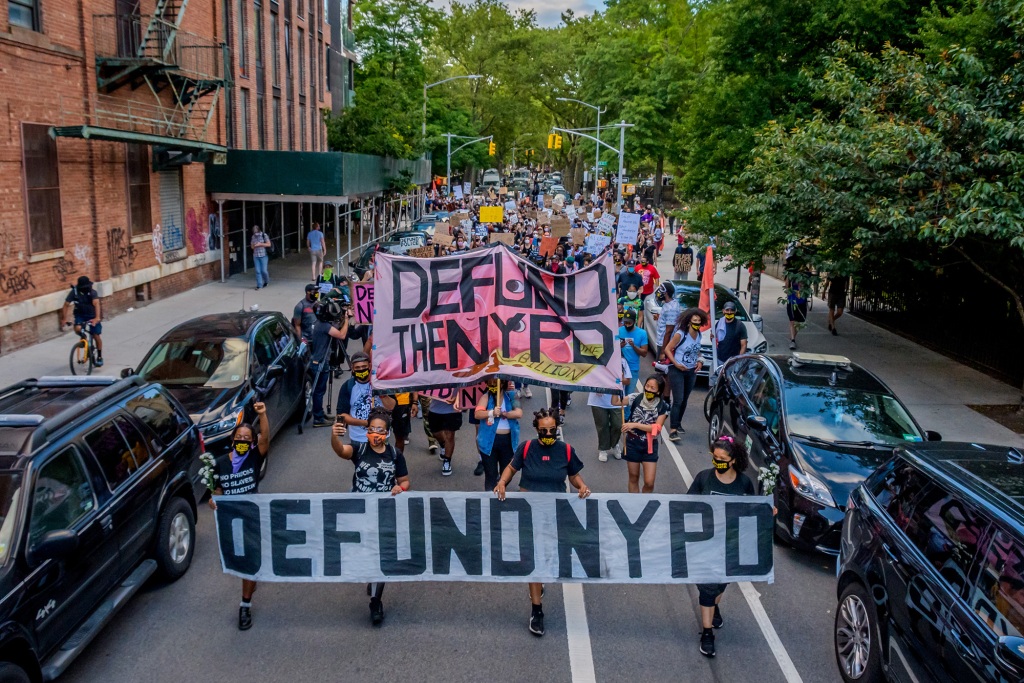 The crime in Chicago is bound to increase under the “Safety Accountability and Fairness Equity Today Act,” a new law passed by Democrat politicians that eliminates cash bail for 12 non-detainable offenses, including second-degree murder.

The act takes effect on January 1, permitting perpetrators of these crimes to simply be charged and released back into the community without bail.

The streets of Soho and Tribeca, two of the wealthiest zip codes in the world, now littered with graffiti, knockoff goods, drugs, and criminals…pic.twitter.com/AQLWle3ARp

The Democrat Party, which heralds MS-13 as “children of God,” is hellbent on destroying the rule of law, Fox News host Tucker Carlson warns.

“The rule of law is the one thing that America has always had that the rest of the world has not. That’s why people come here,” Carlson admonished. “Liberals do not consider it important. They’re working to end it. Equal protection under the law is disappearing.”

The post Schizophrenic Homeless Drug Dealers Are On A RAMPAGE Taking Over The Streets Of San Francisco — This Is What Democrat-Run Cities Look Like Across The U.S. appeared first on The Gateway Pundit.