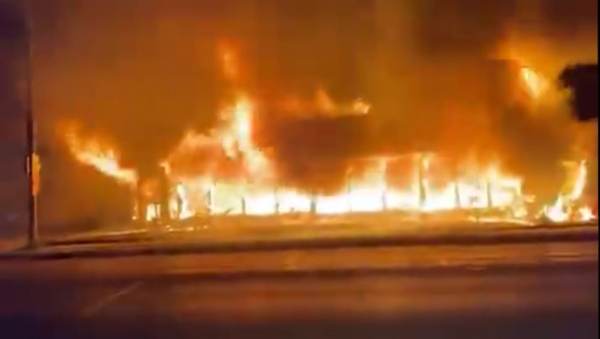 A Kenosha, Wisconsin furniture store was destroyed by an arson fire set during Black Lives Matter riots over the police shooting of Jacob Blake, August 25, screen image from video by Shelby Talcott.

A manufactured crisis produced by Black Lives Matter supporters has attempted to gin up angst about Wisconsin gubernatorial candidate Tim Michels’s offhand comments about standing up to biased and incendiary media.

The B-Team level activists organized a demonstration outside a Michels fundraiser in Appleton, WI, Friday, against comments they deem “not acceptable” and something he “can’t get away with.”

Michels ‘s comments were made when responding to written-word performer (“reporter”) Corrinne Hess, writing for the Journal-Sentinel, who concluded that because Michels and his wife Barbara donated money to Christian churches and help fund childhood cancer research, Michels is a seething anti-gay, anti-LGBT bigot preparing a reign of terror against all of the sleepy farmland state’s hyphenated communities.

What did Michels say that was so outrageous to these activists? In response to the patently false accusations levied against him, Michels told conservative talk radio host Vicki McKenna:

I believe people should just be ready to get out into the streets with pitchforks and torches with how low the liberal media has become. People need to decide, Am I going to put up with this? Am I going to tolerate this — taking somebody that gives money to churches or cancer research and use that as a hit piece in the media? I’m appalled. It’s disgusting.

Watchdog reporter Sophia Voight from the Appleton Post-Crescent was !on the scene!:

“He has to know you can’t come into Wisconsin and talk like that and get away with it,” said Souls to the Polls founder, the Rev. Greg Lewis, during the Friday afternoon protest.

“That’s where we draw the line,” Service Employees International Union Wisconsin member Calena Roberts said about Michels’ comment. “We’re taking to the streets to let him know that that is not acceptable.”

In 2020 supporters and participants of the Black Lives Matter movement were responsible for mass destruction, rioting, violence and burning businesses to the ground in Kenosha, WI, after police shot armed sex offender Jacob Blake.