Cádiz vs. Barcelona Game Temporarily Suspended After Fan Suffers Cardiac Arrest – At the Same Time Camera Operator Had a Seizure and Fainted 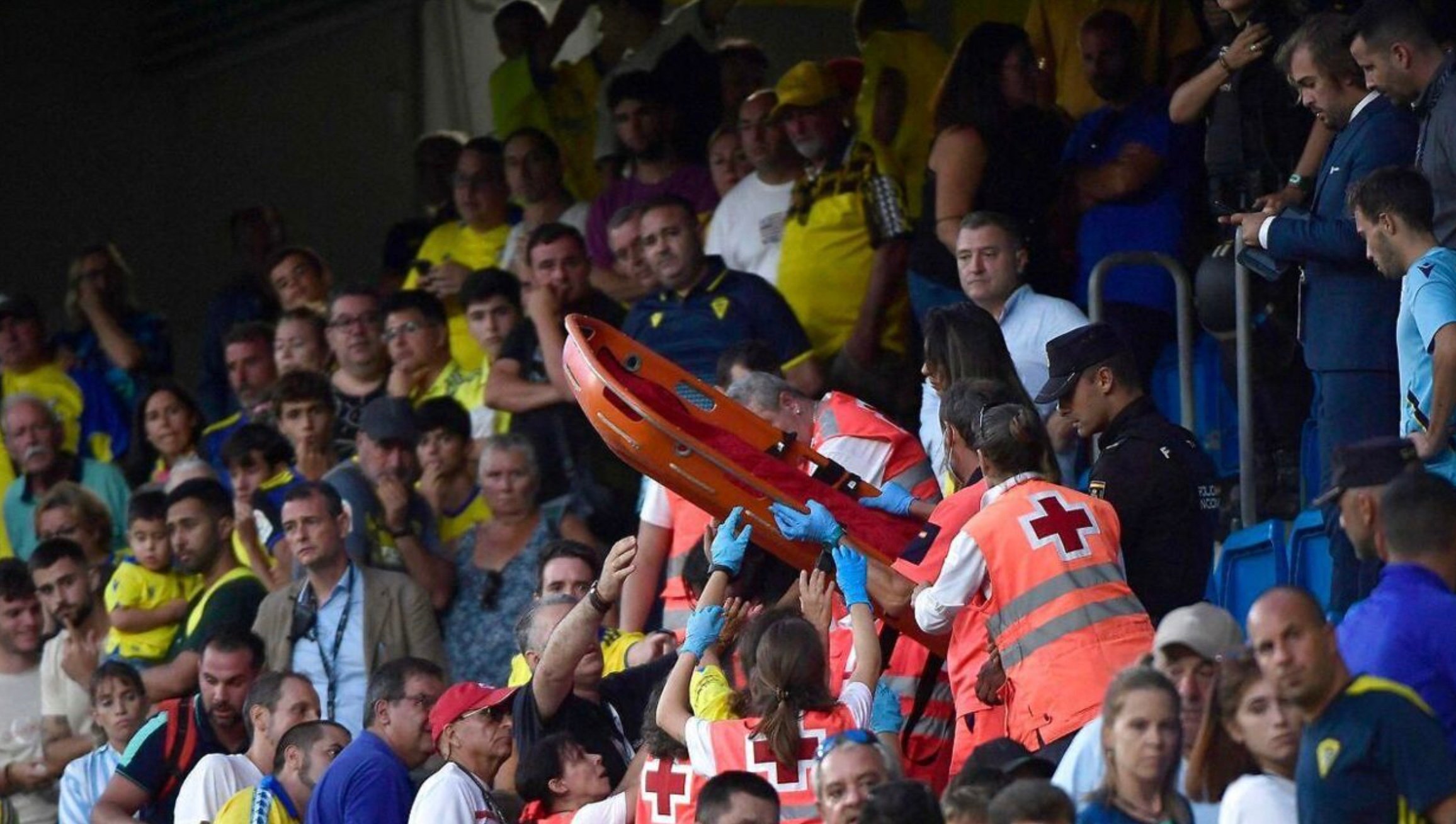 Are we witnessing what will become the ‘new normal’?

On Saturday, a male spectator in the stands experienced a cardiac arrest, which caused the game of  Cádiz versus FC Barcelona to be suspended for over 50 minutes, according to ESPN.

According to a statement released by Cadiz, a medical team was able to treat the man with a defibrillator successfully. At the same time, one of the Tribune camera operators suffered a seizure and fainted.

Below is the official statement from Cádiz:

On the 81st minute, the match against Fútbol Club Barcelona was stopped due to a health alert in the south end stands. The protocol established with Cruz Roja quickly came into operation, assisting a man in cardiac arrest.

One of the medical teams went to the stands with a defibrillator and a monitor, starting the resuscitation tasks. At the same time, FC Barcelona offered a second defibrillator in case its use was necessary, and it was brought to the area by the players themselves.

The resuscitation was positive after a few minutes, and the fan was transferred to the ICU of the Hospital Puerta del Mar, where he remains hospitalized.

In addition, one of the Tribune camera operators suffered a fainting spell, which was also quickly treated by the stadium’s medical staff without further consequences.

The organization would like to thank the exemplary behavior of the fans in the south end of the stadium for this situation, as well as the security staff and Cruz Roja for their quick action to ensure that this incident had a happy ending.

Cadiz’s substitute Jose Mari ran with a defibrillator and a stretcher to the fan behind the home team’s goal before the teams went back into the dressing rooms, according to ESPN. After a medical emergency, Cadiz goalkeeper Jeremias Ledesma raced over with a defibrillator and threw it into the stands.

Cadiz keeper Jeremias Ledesma sprinted over with a defibrillator and threw it into the stands after a medical emergency in the Cadiz vs. Barca game. Thankfully the fan is now stable, and thoughts with him. Huge praise to Ledesma for his quick thinking

From a Barcelona medical staff to the Cadiz Goalkeeper quickly into the stands. This was how a Cadiz fan who suffered a cardiac arrest during the Cadiz-Barca game yesterday life was save.
Humanity is >>> football.

“The fan has recovered his pulse and they have taken him away in an ambulance,” Cadiz president Manuel Vizcaino said. “He was reviving and falling again, but in the end they managed to stabilize him. The game is going to resume.”

“It was not a nice situation for anyone,” Barcelona coach Xavi Hernandez said after the game.“Health is more important than anything.”

My Prayers & Wishes For That Spectator Who Suffered A Cardiac Arrest During The Match Between @FCBarcelona & @Cadiz_CFIN. Respect To Ledesma For Rushing With Medical Kit & To All Other Players For Praying.
LIFE IS THE TOPMOST PRIORITY,FOOTBALL IS MORE THAN A GAME!#CádizBarça pic.twitter.com/f68UKnf5SG

The game was resumed and Barcelona won their first match vs. Cadiz since 2006.

Barcelona win their first match vs. Cadiz since 2006

The post Cádiz vs. Barcelona Game Temporarily Suspended After Fan Suffers Cardiac Arrest – At the Same Time Camera Operator Had a Seizure and Fainted appeared first on The Gateway Pundit.